Leveraging the CEED Community to Empower Marginalized Women in Slovenia

Leveraging the CEED Community to Empower Marginalized Women in Slovenia

The program brought together women who are, in general, underserved with regard to entrepreneurship. It especially focused on women from marginalized groups such as immigrants, ethnic minorities, first-time job seekers under age of 30, unemployed mothers returning from maternity leave, single mothers and women with disabilities. All of these women have greater challenges in finding work and providing for themselves, their children and their families.

From over 100 applicants in January 2017, 39 women were invited to attend a two-day Entrepreneurship Bootcamp.  Among these, 24 women were selected to attend our year-long entrepreneur-learning program, and 19 participants concluded the program successfully. From among the 19 participants, seven new companies were registered in 2017.  Other companies had already been registered or were previously established as NGOs, and the program helped them take their companies/NGO’s to the next level.

The focus of the entrepreneur-learning program was to provide training, peer advice, mentorship and networking to help participants develop their business model and prepare them to run their business. Most importantly, the program leveraged the power of the CEED entrepreneur community, immersing participants into the CEED network to help them integrate into the business community and make the connections needed to build business partnerships and engage potential customers. Fifty-six experienced entrepreneurs from the CEED community were recruited to take on roles as mentors or lecturers in the program.

The women entrepreneurs who received the financial awards are:

Zeljka Bohar was an amateur confectioner since childhood. She started thinking about a professional career in confectionery when she lost her job in marketing in 2015. By participating in the WE Inspire she made the break from ‘a baker to an entrepreneur.’ “From a baker, I became a professional creator, a developer of recipes and the main driver of modern trends in Slovenian confectionery.” She now caters, develops confectionery recipes and products, and trains professionals and gourmet enthusiasts. She has also decided to realize her long-standing desire – to establish the Confectionery Academy in Ljubljana!

Having cerebral palsy was not an obstacle in her life.  Barbara Šamperl joined the program because she needed direction on how to start a business offering exercise to the physically disabled. She was convinced that her idea had potential and that she could acquire the needed entrepreneurial skills through CEED.  She formally founded “Plan B” in October 2017.  PLAN B is about raising awareness of the importance of movement for better quality of life among the physically impaired and general public. She advises parents of children with cerebral palsy and runs workshops for kindergarten and elementary schools. 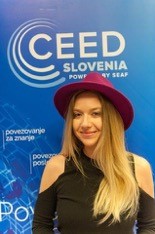 Sara Zavernik poured her energy and love for hats into the brand ‘The Blonde Bliss’ (www.theblondebliss.com) and she has a goal — to penetrate foreign markets and build her brand of handmade hats in Slovenia and abroad. Working with a local craftsman whose work is based on a 90-year tradition of hat making, her aim is to modernize the craft and produce quality, unique and hand/made fashion hats. “The We Inspire program made me even more committed, persistent, and focused.”
ceed2018-02-12T22:28:54+00:00