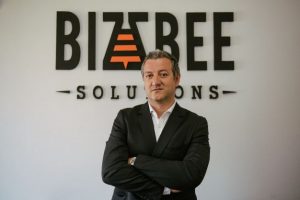 Dancho Dimkov, CEED Macedonia member and Founder and CEO of BizBee Solutions recently sat down with CEED Global to discuss his journey as an entrepreneur and his path to founding BizBee—his challenges, his successes, and lessons learned—along with the publication of his new book, weathering COVID, and his relationship to CEED.

In 2015 Dancho founded BizBee Solutions, a management consultancy that partners with consultants, software providers, agencies, and high-ticket service providers to build customized B2B lead generation and sales processes for its clients, though he founded his very first business, AdvertSMS—the first marketing agency in Macedonia to use mobile devices as a medium—in 2008 at the age of 21. The following year Dancho won “Global Innovator for 2009,” an honor awarded by the World Bank, which led to Dancho participating in the Global Forum for Innovation and Entrepreneurship in Brazil, sharing with other entrepreneurs the story of how he started AdvertSMS and the innovation behind its founding. The experience of learning all the ins and outs of running a first business proved invaluable for what was to come for Dancho, from how to do invoices to what creates successful B2B sales.

From AdvertSMS, Dancho’s path ventured from agriculture to software before ending with he and his 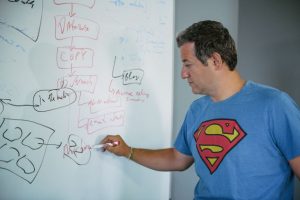 wife founding BizBee.  He spent around 3 years working for a Dutch development organization, focused on entrepreneurs and startups in the agriculture sector. “In those three years that I worked there,” Dancho noted, “we built an agri-incubator in Macedonia. We started three different agri-cooperatives, farmers merging into business entities in order to do it. And it was exciting.” He then transitioned into the software space, building a startup for the UK company Retell Ltd., which was looking to enter North Macedonia. In working for Retell, Dancho was engaged in everything from finding a location, to creating processes, to overseeing operational management, “everything to build a company from scratch,” Dancho pointed out, “and that took me three years as well. But it also helped me [know] how to manage and [introduced me to] the I.T. world. So the agile framework of project management I really found fascinating. And after that, I said, ‘You know what? I’m going to start my own business again’.”

BizBee’s first iteration was that of digital nomad as Dancho and his wife Maja Dimkova initially worked from around the world. “We were travelling around Europe,” Dancho said, “working from restaurants, from bars, whatever we find, and it was actually an interesting year of travel. But as you know, at some point you’re saying, ‘Well, you know what? You need some stability’…and to take a step back,” so Dancho and Maja returned to North Macedonia.

BizBee began as a management consulting company, focused solely on entrepreneurs but has since evolved to specializing in B2B lead generation for corporate small and medium enterprises (SMEs), focused on three specific industries: consulting coaches and trainers, marketing/sales/HR agencies, and software development companies.

The change in Bizbee’s client base and narrowing of its focus is tied to Dancho’s own personal mission. What drives Dancho is helping as many companies as he can, as many entrepreneurs as he can. In switching to SMEs, Dancho said, “we are actually helping companies to help other companies in order to survive. And then the impact gets really big. When we work with consultants, especially a mindset coach or a financial consultant, we are helping him, but he’s actually helping a lot of other businesses, and that creates a much bigger impact on the whole world. I see that as a good logic…helping companies to actually help other companies in order to make the world a better place.”

From day one, Dancho, “wanted to figure out a way how to make a company that is going to work without me.” When asked what his biggest challenges and triumphs have been since starting BizBee and creating such a company, Dancho responded that his biggest challenge was delegating in the early days, letting his employees do the work, even if they made mistakes, as that is the only way employees learn and a culture of trust and dedication can be fostered. His triumph was actually succeeding in creating that environment at BizBee: “when I put the right people in the right place, I took myself out of the equation…I should be the glue. Help a bit there…but not the key person in each of the departments.” Dancho now had “the freedom to start learning new stuff, and I started the book writing. I started going over a lot of additional trainings in order to improve myself.” 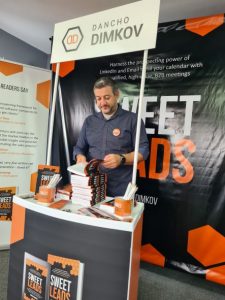 Dancho published his first book in what will be a series of three—Sweet Leads: Harness the Prospecting Power of LinkedIn and Email to Fill Your Calendar with Qualified, High-Value B2B Meetings—in August of this year. An Amazon best seller, Sweet Leads recommends augmenting B2B sales that target your ideal client through relationship building instead of one marked by “scarcity, urgency, pushing people toward buying”—what Dancho calls “digital outreach fever.” Instead of a sales pitch teetering too closely to spam, Dancho advocates a 6-step framework that encourages engagement with potential clients that is centered on solution-oriented problem solving rather than unsolicited, and often unwanted, hollow sales. Three of the six steps outlined in his book are focused on planning and three on execution. Dancho has received incredibly positive feedback on his book and his 6 steps, currently rated 5 out 5 stars on Amazon. His relationship with CEED Macedonia has also helped the marketing and early success of Sweet Leads.

Dancho joined CEED Macedonia 6 months ago, amid the COVID-19 pandemic. BizBee has been treading water since the onset of COVID, “We didn’t fire anyone. We didn’t decrease the salaries, not even a bit. So in that regard, the whole point was at least to keep maintenance.” But as the majority of his clients are located outside of North Macedonia, he was looking for an international network which he found with CEED Macedonia. “For a monthly membership,” Dancho noted, “you get access to a global network, but also to knowledge.” He further explained that CEED is “really like a mastermind group with similar peer players that you can just say, ‘Well, wait, how did you solve this problem? How did you solve this? How did you solve that?’ And there is a community of like-minded people, and it helps a lot because

sometimes I have a problem that I can propose in front of the group, or someone else has a problem that I can help solve.” Dancho also found CEED’s support to be especially helpful when launching his book, “I saw people also supporting me as their member…It’s in their interest to help me, and they’re not doing it for selfish reasons, but we are like branches, part of a tribe. Let’s try to help him.” For Dancho, he sees CEED as “really doing the right things rather than, you know, doing for the sake of doing, actually trying to help members that are in their community in order to grow on a large scale. And I think that’s the overall impact that well, if all the members in CEED succeed, the whole economy will grow.”