What distinguishes CEED Global is that we provide the tools, network, and know-how to empower our entrepreneurs over the long term, so they can grow their businesses and be resilient in the face of changing realities. One such entrepreneur and long-time CEED member is Fidan Muhaxhiri, the founder of ACN, a company in Kosovo that offers heating, ventilation, lighting, and air conditioner systems. Muhaxhiri recently sat down with CEED Kosovo to talk about navigating the challenges of the COVID-19 pandemic and the benefits he has experienced from his CEED membership. He joined CEED in 2010, prior to founding ACN, and has remained an active member over the past 12 years. 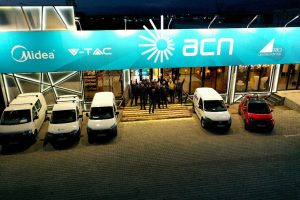 Muhaxhiri founded ACN in 2012 as a distributer of air conditioners in the B2B and B2C Kosovo market. During its first two years, ACN saw the potential for further growth by adding an LED lighting business unit, which it began in 2014. Then in 2018, it identified another area for growth and created a third business unit focused on B2B advertising materials. Currently, ACN provides services to its customers through these three departments. As noted on ACN’s website, “For over 10 years we have built our business on excellence, honesty, and exceptional customer service. We provide our customers with nothing less than what we expect out of our own employees.”

As with so many businesses worldwide, and especially in fragile markets such as Kosovo’s, ACN was affected by the country-wide lockdowns due to the COVID-19 pandemic. Employees were unable to come to work, and unlike some companies that could pivot to remote work in lieu of in-person, ACN’s business did not allow for moving fully online. Additionally, its B2B clients were facing difficulties from delays on already-started construction projects that then delayed ACN’s work. 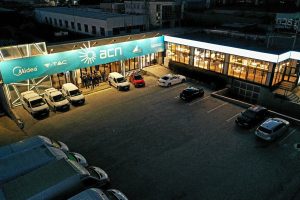 “As a leader of a business in the growth phase, which requires huge investments, as our products are 100% imported, and you usually pay upfront for all the orders,” Muhaxhiri stated, “I started thinking and strategizing on how to deal with this situation.  We were very concerned about huge projects we had already started before the pandemic that were works in progress and were facing delays in implementation.” After two weeks of heavy uncertainty, Muhaxhiri started contacting all his clients, telling them that ACN was fully committed to continue working and would be able to finalize its projects—those recently started and those in the closing negotiation phase. Despite the uncertainty created by the pandemic and lockdown, Muhaxhiri took the same approach with ACN’s vendors and partners from whom he was purchasing his supplies and continued to order products.

Muhaxhiri identified how the pandemic’s changes to the workplace could actually benefit ACN. With the majority of employees across Kosovo now working from home instead of going into the office, many were looking for lighting and air conditioners and doing small construction projects on their homes to make them a more suitable environment for remote work. ACN began targeting these customers. Previously operating only out of Prishtina, ACN opened physical shops in 5 more cities in Kosovo. According to Muhaxhiri, “this strategy helped us maintain steady cash flow and even increase sales more than we had planned in our pre-pandemic business plan.”

Since joining CEED in 2010, Muhaxhiri has been an integral part of Kosovo’s CEED community, including during the height of the pandemic. As he recently told CEED, being a member of the CEED community “has had a real good impact on our business. CEED is a unique place where you can learn from others, you have an open and positive environment where you can share your experience in doing business, but also learn from others with similar challenges and problems. I have been a part of CEED’s different programs since 2010, the so-called early programs TOP CLASS and TOP CLASS PLUS, after that CEED GROW and CEED PRO, and now I am a part of the CEED GOLD CLUB.” CEED has been a significant support for Muhaxhiri during the founding and growth of ACN because of the “exchanging with like-minded entrepreneurs, especially with other GOLD CLUB Members, being a part of a unique environment, and creating a network with other entrepreneurs.” Muhaxhiri has also given back and contributed to CEED and the local entrepreneurial community in Kosovo by sharing his experiences with the other entrepreneurs in CEED’s network and by sending his managers to specialized CEED programs like Marketing and Sales and Process and Operations.

More than 2 years into the pandemic, ACN’s outlook is positive, and business is growing. In light of the increased remote-working lifestyle and the resultant increased need for electricity, ACN will be focusing more on energy efficient products, which it already had in its portfolio. “However,” as Muhaxhiri pointed out, “now is the right time to promote them more than before, maybe even changing 100% to these products.”

From the beginning and throughout the entirety of ACN’s growth into the company it is today, CEED has been there. As ACN grows and adapts in the face of changing market demands and other challenges, CEED will continue to be there, providing ACN with high-touch support and services over the long term, one of the core components of CEED membership.